The 4-Hour Startup: Marketing It

This is a follow-up post to The 4-Hour Startup: How I Did It. Statistics will come in another post to show you exactly how effective my marketing efforts were.

In the past, I’ve dabbled with internet marketing, submitted articles and tips to blogs, and played with Adwords, but I had never experimented with any sort of social or viral marketing before this project … and oh what an experiment it was! We all know the power of viral marketing from designed-for-viral sites like Hipster, Threewords.me, and FMyLife, but could it work for eCommerce? Is it possible to utilize social networks (hint: yep) to sell products? I was willing to give it a shot and find out.

Like I mentioned before, I’m quite inexperienced when it comes to internet marketing. I don’t have a giant web platform from which I can shout at thousands of adoring fans and my mailing lists consists of a grand total of 0 people. My social reach goes as far as the 179 friends on my Facebook account. But, luckily for me, none of that mattered, because I saw a platform experiencing exponential growth right before my eyes. Over the course of a few hours I had witnessed a single spontaneous Facebook event grow from 50,000 attendees to well over 100,000, and another with similar growth. Not only were they growing – they were extremely active, with new comments and photos rolling in every few seconds. In short: these impromptu Facebook communities were my only chance, and they were mine for the taking. If they didn’t work out, the project was dead.

It was worth a shot, so I went for it. Just minutes after I finished building the site, I posted a link in each in the two events. The picture, title and description were pulled directly from the Snowpocalyse website, so that made posting easy – ctrl+c and ctrl+v (yeah, no MacBook for Loren). The first sale came in just four minutes later, and another just a minute after that. With profits at $8/shirt, the first sale paid for my domain name and the second made the project profitable. Profitable in 5 minutes – can’t beat that!

At that point, I figured there must have been quite a few hits to the site, so I set up a bit.ly link to track clicks in real time. Google Analytics was tracking all visits to the site, but I only used bit.ly to share the link in the two Facebook events to see whether or not my posts were driving traffic. They were:

Note that these are only clicks on a few links. The actual traffic was significantly higher
Tweet count is completely inaccurate since it does not represent other links

This is the total aggregated data, but most of those clicks occurred within the first two days. 3,857 clicks on links that I had only posted a handful of times, and that doesn’t even include links that others had shared (since I was the only one using the bit.ly link). Keep in mind the structure of Facebook events: the only people who see links posted to the event wall are those who visit the actual event page – event wall posts don’t show up in news feeds. So that means 3,857 people who were looking at the Facebook event pages deliberately clicked my links. CPC = practically 0. Not too shabby, but it got better.

The guy who started the larger of the two events emailed me several hours after I began posting links, and half-jokingly asked for “royalties”. How could I pass that up? I didn’t know what his privileges were as an event administrator, but I told him he would be subsidized if he could leverage the attendees (200,000+ at that point). He agreed, and here’s the result: 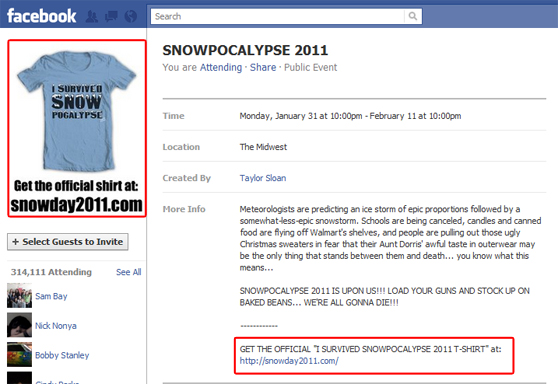 And just like that, my t-shirt was effectively in the eyes of hundreds of thousands of people, almost for free. Can’t complain about free advertising! He also removed a few of the spammy low-quality shirt links from the event, though I did not ask or expect him to do this, nor do I think it had a significant effect. In another post I’ll tell you exactly how many hits that silly little Facebook even drove to the website.

People like to share, and they’re more likely to share if they don’t have to put in a lot of effort. It doesn’t take a rocket surgeonist :D to figure out that placing social media buttons on your website works like freaking magic. So I went ahead and did that.

And how well did that work? Ridiculously well:

According to Facebook, Snowday2011.com was shared a total of 3,730 times over a couple days. Those “shares” are fantastic because they are prominently displayed in news feeds – large, glorious, image and all, with each “share” in front of hundreds of people. Here’s a little secret: “likes” don’t do that. They just get a little tiny line with some text – hardly noticeable compared to “shares”.

I also had a button to share on Twitter, but I’m not sure how well it performed. At its peak, I saw the snowday2011.com link being posted every few minutes, which can’t be bad. I’m not nearly as active on Twitter as Facebook, so I didn’t focus on that medium as well as I probably should have. If anybody has tips here, feel free to share in the comments.

Other than Facebook and Twitter, both of which required minimal knowledge and skill, I did almost no marketing. I posted a single link on Hacker News, which rose to the top and remained on the front page for at least 24 hours. The key with Hacker News is honesty and transparency, which are two of the reasons I appreciate the community so much. I didn’t just post a link and leave it at that – I followed up with a response outlining the approximate steps I took to bring the project to life and hung around all day making sure to answer (almost) every last question that was asked. It’s the little things that matter :)

The traffic that generated by these sites doesn't come close to the viral sites I mentioned at the beginning, but tens of thousands of hits a day to an impromptu site with nothing to offer but a silly t-shirt isn't exactly negligible traffic, especially when it results in sales (and profit) every few minutes. So, now you know exactly how I marketed my 4-hour profitable project, but what did I learn about social marketing along the way? Here are some takeaway points:

I also have some things to look into:


If you have questions or anything to contribute, please let me know in the comments, and subscribe to my RSS feed for future updates. Thanks for reading!